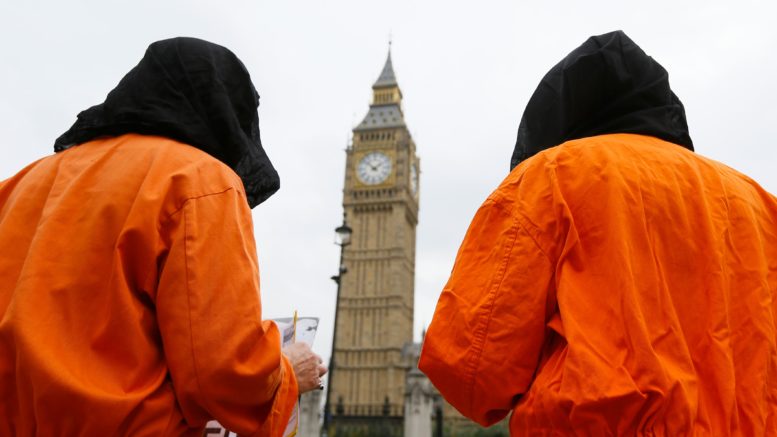 British intelligence officers witnessed prisoners being tortured and played active parts in the rendition of terrorist suspects into the hands of the secret police of brutal regimes knowing that they faced inhuman treatment, a scathing report has said.

The British authorities, the Intelligence and Security Committee (ISC) concluded, turned a blind eye to routine mistreatment by US authorities although the UK intelligence agencies became aware from an early stage that this was going on.

The ISC noted that the official US policy remains that prisoners should not be mistreated, in spite of President Donald Trump’s previous assertion that “torture works’.

But the committee called on the government to conduct a review of “consolidated guidance”, the rules under which intelligence officers do not become complicit in torture by the British state or allied countries.

Tony Blair’s government, in power during the period of the investigation, could have done more to influence the policies of George W Bush’s administration, the committee said.

Jack Straw, the then-foreign secretary, said after the report’s publication that although he was in charge of MI6 and GCHQ, he was unaware of some of the collusion in abuse. “I have today learnt much about the activities and the approach of these agencies of which I was not aware before,” he said.

Although the report, “Detainee Mistreatment and Rendition”, gives goes into detail about UK collusion in abuse by the US and other foreign governments, the ISC said it was stopped from talking to several key witnesses by Downing Street. As a result the intelligence and security services are held to account in the document, but the politicians escape relatively unscathed.

The committee was prevented from questioning Mr Straw and David Blunkett, the then-home secretary in charge of MI5, even though cabinet secretary Jeremy Heywood assured the ISC when the report was commissioned in December 2013 that it could summon “relevant former ministers and officials”.

The report says: “Had the further witness statement we sought been made available to us and had we therefore continued the inquiry beyond this point, we may have differently categorised some of the cases of concern, and taken a different viewpoint.”

One of the questions Mr Straw would have faced is in a passage in the report which noted that MI6 “sought and obtained authorisation from the foreign secretary” for paying for a plane in which rendition was carried out.

Mr Straw insisted in response that he would have been happy to give evidence. He said: “These are extremely important reports which need to be taken very seriously and their conclusions followed through. As the report makes clear, I was not invited to give evidence to the committee, though I would have been pleased to do so, had I been asked.

“Although I was formally responsible for both SIS and GCHQ during my period as foreign secretary (June 2001 to May 2006), I have today learnt much about the activities and the approach of these agencies of which I was not aware before.”

But despite knowing of the abuse, the UK agencies continued to supply questions for interrogations, the committee said. It found there were 232 cases this took place despite the knowledge or strong suspicion that the information was being obtained by torture or other abuse. The damning statistics charted show that there were 198 cases where there was definite knowledge of mistreatment.

There is no evidence, said the report, that British officers themselves took part in torture, and there was “no smoking gun” suggesting otherwise.

The UK agencies played a major role in the rendition of suspects, the committee said. MI6 and MI5 financially subsidised, or offered to subsidise, the rendition of suspects on three cases and provided information enabling arrests and transportation in 28 cases as well proposing or agreeing to rendition on 22 others. They failed to stop rendition in 23 cases, including those of British nationals or residents. Two renditions took place through Diego Garcia, the British owned island on the Indian Ocean whose population had been deported to make way for an American base.

British intelligence and security services responded that the inquiry found its officers did not take part in any mistreatment. But a senior Whitehall security official said: “We are used to being held to account by the ISC and oversight bodies, and it is right that we as a service are subject to a robust system of independent oversight and accountability.

“We have engaged transparently and fully with many parliamentary processes, civil cases and police investigations that have taken place since post-9/11. The ISC’s reports are frank and clear. We were simply not prepared for the work we became involved in following 9/11. There were deficiencies in capability and understanding; and therefore in the guidance and training that we gave to staff.

“But it is important to understand and remember the shock of 9/11, and importantly the huge boost it gave to terrorist groups around the world. It was simply unprecedented in its scale. Governments in Europe and North America anticipated further terrorist attacks imminently, and [the UK government] believed that the UK was a likely target. The demand placed on the security and intelligence services were huge. SIS [Secret Intelligence Service] had to deal with a sudden upsurge in counterterrorism work for which we were not prepared … Post 9/11, the instinct of the British people and our government was to act in solidarity with the United States.

“Our staff were under pressure to deliver intelligence on the threat. We had few sources. Potential value of detainee information was obvious. The immediate demand, to deliver intelligence to defend against the terrorist threat, became the overriding priority. Our officers found themselves in unfamiliar, exceptionally challenging environments, undertaking interviews of a different nature to those they were used to and trained for.”

The ISC report says: “We have considered the actions of those in the agencies’ head offices. Immediately after 9/11, the agency heads and deputies were briefed by the CIA: these briefings clearly showed US intent but were not taken seriously.

“It is difficult to comprehend how those at the top of the office did not recognise the pattern of mistreatment by the US. That the US, and others, were mistreating detainees is beyond doubt, as is the fact that the agencies and defence intelligence were aware of this at an early point. The same is true of rendition: there was no attempt to identify the risks involved and formulate the UK’s response. There was no understanding [within the UK government] of rendition and no clear policy – or even recognition of the need for one.

Theresa May issued a statement saying the lessons of what happened in the aftermath of 9/11 “are to be found in improved operational policy and practice, better guidance and training, and an enhanced oversight and legal framework”.

She added: “We should be proud of the work done by our intelligence and service personnel, often in the most difficult circumstances, but it is only right that they should be held to the highest possible standards in protecting our national security.”

Sonya Sceats, Freedom from Torture chief executive, said: “At this time when President Trump openly endorses torture and has placed a suspected perpetrator in charge of the CIA, it is more important than ever that Theresa May delivers on her predecessor’s promise of a judge-led inquiry to show in deeds, not just words, that Britain stands firm in its support for the absolute torture ban.”

Obama to urge Americans not to give into fear of terrorism

In wake of terrorist attacks, sheriffs call on citizens to take up arms