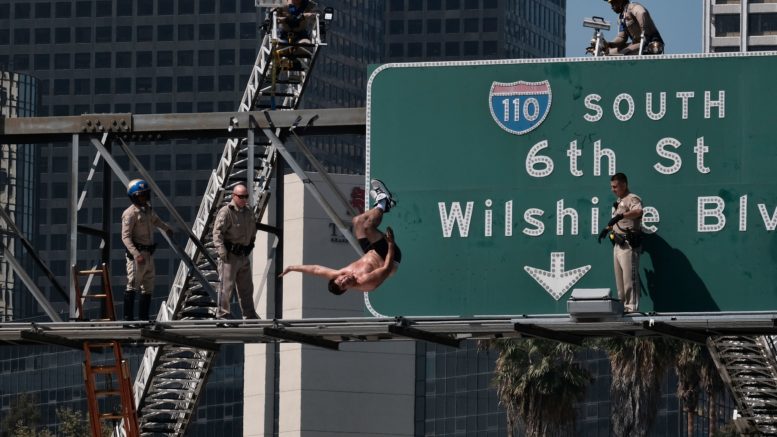 A shirtless man wearing boxer shorts shut down the southbound lanes of the 110 Freeway in downtown Los Angeles for two hours Wednesday morning after he scaled an exit sign, unfurled political banners and began vaping, dancing and shouting from a bullhorn.

The spectacle — an apparent publicity stunt executed by an aspiring rap artist — created a massive traffic jam that paralyzed much of downtown as police officers and firefighters scaled the sign in an attempt to remove the man.

The episode finally ended when the husky sign climber performed a back flip off the structure and landed on a massive inflatable cushion placed on the freeway by firefighters.

The man, who was identified by police as 29-year-old Alexander Dunn, was booked on suspicion of delaying a police officer, trespassing on state property and failure to obey a regulatory sign.

Dunn, who performs under the stage name Dephree, was being recorded throughout the incident, his producer told The Times. They planned to release the images in a music video Wednesday evening, said King Graint.

The California Highway Patrol began receiving reports of a man on a traffic sign just after 8 a.m., said Officer Dion Conley. Callers reported the man was hanging banners, while others questioned whether he was suicidal.

“Fight pollution not each other,” one of the banners read.

Another sign stated: “Give a hoot, don’t pollute.” A third banner with graffiti-style writing simply had a name painted across it: Dephree.

The man scaled the exit sign for southbound 6th Street, Wilshire Boulevard and downtown 4th Street offramps. All southbound lanes on the 110 freeway leading into downtown were closed by 9:30 a.m.

Witnesses said the man was alternating between yelling about himself, love and God, and freestyle rapping. He also took breaks and would sit down and vape.

Los Angeles firefighters placed two enormous inflatable mattresses beneath the freeway sign and extended fire ladders toward the structure as police closed the freeway at 2nd Street. CHP motorcycle officers scaled the exit sign in an apparent attempt to remove the man, but he climbed to the very top of the traffic sign and struck poses for bystanders and appeared to taunt authorities.

By 10 a.m., officers had apparently convinced the man to end his performance. He stood up facing the sign and did a backflip onto one of the cushions. Afterward, he appeared to be uninjured and was placed on a gurney in a seated position and removed from the scene.

Among a number of bystanders who had gathered to watch the action was Jeiron Session, a freelance videographer from New York. He was driving by when he saw the man, nearly naked on the freeway sign.

Incredulous, he stopped his car and began videotaping. Session noticed the man’s signs about pollution and said he was making some relevant arguments.

“He’s getting his point across, getting attention,” Session said.

The incident was the latest in a number of publicity stunts that have brought L.A. area freeways to a grinding halt — including a YouTubed episode in which hundreds of motorcyclists blocked the 10 Freeway in West Covina while a man proposed to his girlfriend.

However, Wednesday’s sign antics could carry financial consequences for the performer, according to one expert.

Former L.A. County Dist. Atty. Steve Cooley said that prosecutors could consider additional charges if they have evidence the stunt was done for commercial gain. “If you can establish that the act caused damages, then you seek to get that money back from the perpetrator,” Cooley said.

That was the case in 2010, when an Orange County band enraged thousands of motorists by blocking the 101 Freeway in Hollywood to perform an impromptu concert on top of a truck. A judge later ordered band members to pay Caltrans nearly $40,000 in restitution.

“You ain’t poppin’ unless you got haters,” Graint said. Dunn, he said, wouldn’t care about people being stuck in traffic “because the bigger picture is saving the environment and rapping.”