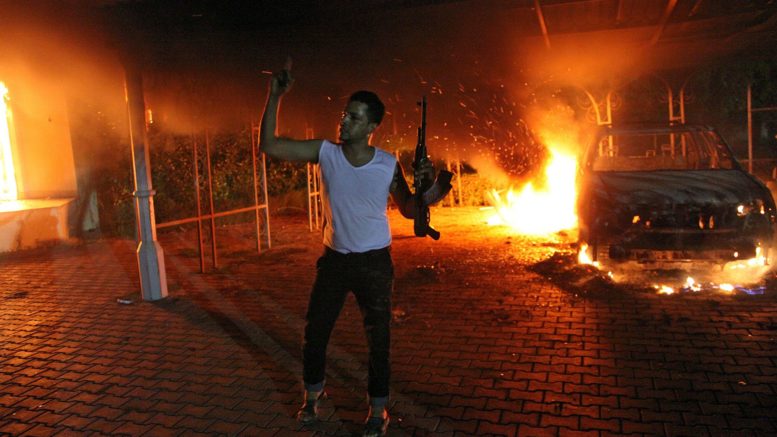 Ahmed Abu Khatallah, who was captured by U.S. special forces in Libya and returned to the U.S., was sentenced on terrorism charges, after being acquitted on murder charges.

A Libyan militia leader convicted in the deadly 2012 Benghazi attacks that killed a U.S. ambassador and three other Americans was sentenced to 22 years in prison Wednesday by a federal judge in Washington.

A jury in November acquitted Ahmed Abu Khattala, 47, of murder and attempted murder in the overnight attacks that began Sept. 11, 2012, on a U.S. diplomatic mission and nearby CIA post. But he was convicted on charges including conspiracy and providing material support to terrorists, and it was the extent of Abu Khattala’s role as ringleader that U.S. District Judge Christopher R. “Casey” Cooper considered in sentencing him.

Legal analysts said the ability of the government to incapacitate Abu Khattala through a life sentence or its practical equivalent would influence decisions whether to seek civilian prosecutions in similar cases in the future. Prosecutors had sought a life sentence; the defense sought 15 years.

While some observers saw Cooper’s decision as a setback for prosecutors, he cast it otherwise.

“Even if you did not pour the gasoline or light the match, the evidence showed you were aware of the attack, and once the gates were breached, the likelihood someone would die was extremely high. This was not guilt by association,” Cooper told Abu Khattala. “This case stands as an exemplar for the principle that a defendant accused of international terrorism can get a fair trial in the U.S. criminal justice system.”

Federal prosecutors said Abu Khattala helped mastermind a terrorist strike abroad that resulted in the deaths of Ambassador J. Christopher Stevens and three others and that he deserved the maximum punishment.

“This fact alone, the first killing of a U.S. ambassador while in the performance of his duties in nearly 40 years, makes this case a truly singular event and warrants imposition of the maximum sentence permissible under the law,” Assistant U.S. Attorney Michael C. DiLorenzo wrote in a sentencing recommendation by prosecutors.

The attacks also killed State Department employee Sean Smith — who died with Stevens in a fire at a U.S. mission residence — and CIA contractors Tyrone S. Woods and Glen Doherty, who died in a mortar attack as the assault shifted to a CIA annex in Benghazi.

Families of those killed, along with those wounded in the attack, submitted sealed statements to the judge, and Doherty’s and Woods’s families sat in the courtroom.

Woods’s widow, Dorothy, asked the judge to impose a life sentence to send a “message clear and strong” to Americans fighting on the front lines against terrorism “that I got your [back].” She said the attacks left her asking what was next for her and the couple’s 5-year-old son and wondering, “Will Ty have died for nothing?”

Abu Khattala’s defense said jurors found him not guilty of the murders of Stevens and Smith, arguing that they concluded that Abu Khattala joined the conspiracy at the mission after it was already on fire and that his “conduct did not lead to death.”

The defense noted that they also acquitted Abu Khattala of all charges in the related attack hours later on the nearby CIA annex. A life sentence for property crimes “would completely disregard, and I would say denigrate, the work and service of the jury. . . . It is clear that the jury in this case found that Mr. Abu Khattala didn’t commit murder,” said Jeffrey D. Robinson for attorneys with Federal Defender for the District of Columbia A.J. Kramer and the law firm Lewis Baach Kaufmann Middlemiss.

The case was seen as a test of detention and interrogation policies developed under the Obama administration to capture terrorism suspects overseas for criminal trial.

Abu Khattala was the first person convicted in the attacks. The Trump administration ordered the Oct. 29 capture of a second suspect, Mustafa al-Imam, who was brought to Washington and pleaded not guilty. But the mixed Abu Khattala verdict showed the challenge of investigating and prosecuting such cases.

University of Texas law professor Stephen I. Vladeck, who has written frequently about the handling of terrorism suspects, said that although “there will be some who think the sentence is not nearly long enough given the crimes for which Abu Khatalla was convicted,” the bottom line of the government’s prosecution was the “finality of the proceeding — the decided contrast between the swift and stern justice imposed on Abu Khatalla by a civilian federal court in D.C., with the never-ending quagmire that is the Guantanamo military commissions.”

Abu Khattala was a leader of an extremist militia that sought to establish strict Islamist rule in Libya and oust the U.S. intelligence presence in Benghazi after Libyan dictator Moammar Gaddafi was overthrown. U.S. intelligence assessments have reported that several groups were involved in the attacks, including Abu Khattala’s brigade.

Prosecutors presented what they called “indisputable” records linking the times of calls on Abu Khattala’s cellphone — but not call contents — to surveillance video taken at the diplomatic mission. They argued the links showed he was at least a key plotter with several participants in the attack in the minutes before, during and after the assault.

At trial, Abu Khattala’s attorneys said he was drawn to the scene as a bystander and that others were responsible for the attack. They questioned the credibility of three key Libyan witnesses who testified that they saw Abu Khattal plan, execute and claim responsibility for the attacks.

Before he ruled, Cooper said he was moved by statements by families — “real victims — not political pawns, not caricatures — but victims and loved ones who endured unfathomable suffering and grief” and praised the massive coordination of U.S. law enforcement, intelligence, diplomatic and military agencies in the case as “the government working at its best across numerous agencies.”

Cooper rejected Abu Khattala’s claim to be a “bystander,” saying he helped launch an attack that foreseeably led to death by driving his men to the mission where they stormed the gates, spoke with them throughout the attack, carried an assault rifle into an office while it was being ransacked and drove afterward to the camp of another extremist group.

“I don’t know if you were the main planner of the attack . . . but that does not mean your conduct was not serious. It was grave,” Cooper said. Deterring future attacks on U.S. government, contractor and local personnel in facilities around the world was a central consideration, he added.

“Anyone intent on doing those people harm, or doing harm to those facilities themselves must know there will be consequences, they will be appropriately prosecuted and given stiff sentences if they are convicted,” Cooper said. He added, “Anyone who might say the federal court system cannot handle a high profile terrorism trial obviously did not come and watch this one.”

Cooper said that it would have been constitutional, if controversial, for him to sentence Abu Khattala to life in prison — as the government sought — based on evidence he had heard that the jury did not. Or if he had based the decision on facts that were established with a lower burden of proof than the “beyond a reasonable doubt,” level required for a conviction.

But Cooper declined to do so, saying that if he had, the jury “would be shocked to learn that — I think for good reason,” and calling the jury system “one of the cornerstones of the American justice system.”

Abu Khattala’s trial shifted the Benghazi inquiry away from partisan politics. Republicans and conservative groups had used the deadly attack throughout the 2016 presidential election to slam Democratic nominee Hillary Clinton, who was secretary of state at the time of the attack.

In an email to CIA employees after Abu Khattala was convicted, then-director Mike Pompeo, now President Trump’s secretary of state, called the conviction “a small measure of justice.”

“It took intelligence to find him, soldiers to assist in capturing him, law enforcement to interview him, and a legal team to put him away,” Pompeo said. Abu Khattala’s sentencing “is to follow; but no term in prison will bring our people back.”