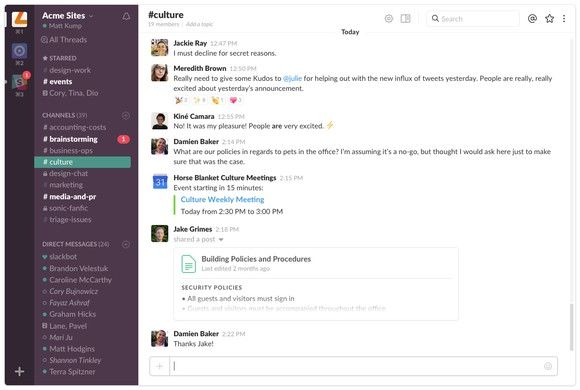 Productivity software Slack said it’s dealing with connectivity issues affecting all workspaces. And everyone who uses it is freaking out on social media.

Slack, the messaging tool used by businesses worldwide, experienced numerous connectivity issues on and off for hours Wednesday morning, but the company says the service is now back up and running.

Slack reported on Twitter at around 9:30 a.m. ET that it was “investigating connectivity issues for all workspaces.”

An update posted on Slack’s system status page 30 minutes later stated that the Slack team, “is still looking into the cause of the connectivity issues.”

Just before 1 p.m. ET Slack reported on Twitter that all service had been restored.

Folks should be able to connect to Slack again. We’re sorry for the disruption. https://t.co/uQIDJzyLSV

Around 500,000 organizations and 8 million people use Slack worldwide according to the company, with 65 companies from the Fortune 100 having paid Slack workspaces.

Slack does not often have long periods of outage. The company reported on its system status page that its application had 100% uptime throughout the month of June up until the Wednesday morning outage. The last outage took place on May 23, when the application was down for around 20 minutes before the issue was resolved.

Further updates on the outage can be followed by going to Slack’s Twitter or system status page.

Comcast recovers from outage of video, broadband services across parts of U.S.