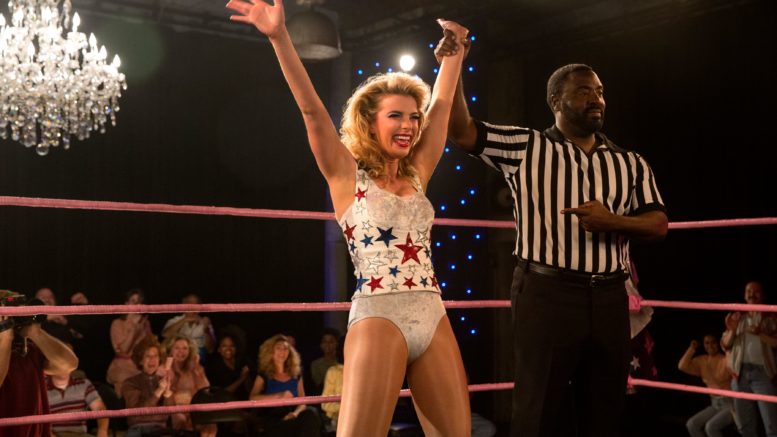 Originally a fun if somewhat lightweight trip down memory lane, “GLOW” has taken on a richer texture and greater relevance in its second season, both in terms of developing key relationships and exploring the period — and the mid-1980s excesses of what stood for “Gorgeous Ladies of Wrestling” — through such prisms as race and the #MeToo movement.

The eccentric characters remain, as well as the dynamic of two actresses — whose friendship was fractured by betrayal — being forced to work together. A third strand involves the show-within-a-show’s cranky producer Sam (Marc Maron), who is alternately fatherly toward his charges, cruelly dismissive and, in one case, harbors feelings that come as a surprise even to him.

The basic dynamic continues, with the struggling Ruth (Alison Brie) full of big ideas — seizing this shot to perform, even if it’s in the circus tent of showbiz — while her ex-pal Debbie (Betty Gilpin), a one-time soap opera star, chafes at the gig’s absurdities, but with her marriage breaking up, increasingly needs it.

The strongest episodes, however, deal not only with their complicated bond, but issues that resonate across the years, from the painful racial and cultural stereotypes in which the wrestling show outlandishly traffics to a network executive luring Ruth to a hotel suite, exposing the complicity that goes into his predatory behavior.

Like “Orange is the New Black,” which is also made under the aegis of producer Jenji Kohan, “GLOW” zeroes in on female relationships within an unorthodox setting. Yet unlike that series, it’s adept at reining in its excesses, and has the additional advantage of separately focusing on the unique insecurities associated with show business, albeit from the seamy, absurd perspective of its outermost fringe.

The performances are a major asset, from Brie capturing Ruth’s hunger to be taken seriously to Maron bringing nuanced layers to Sam — a crusty shell with a soft, almost chewy center.

The dialogue is also sharp, such as Debbie’s wince-inducing response — remember the year — to Ruth’s revelation that she was sexually harassed.

“Feminism has principles,” she says tartly. “Life has compromises.”

The writers have made a few compromises in their efforts to spice up the storytelling, but in this second season the over-the-top flourishes seldom come at the expense of cleverly moving the story forward — and even saying something about who we were and are, then and now.

As a bonus, the finale closes this latest run in a manner that nicely sets the stage for season three. For a show that occasionally felt as if it was precariously perched on the top rope in its first season — leaving doubt as to how long “GLOW’s” light could stay flickering — this second match pretty impressively outshines its debut.