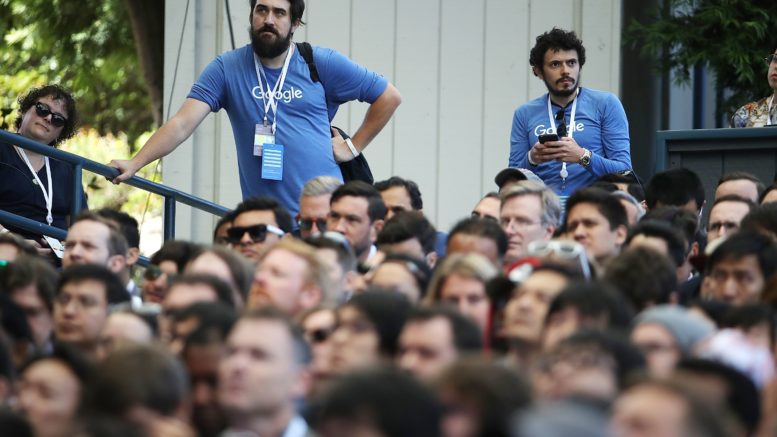 Google is taking a tougher stance on workplace harassment following a nearly year-long campaign of bullying and intimidation set off by the firing of Google engineer James Damore.

New rules sent to employees last week and reviewed by USA TODAY aim to curb online attacks and internal conflict, particularly over the highly charged issue of diversity at the company. According to the documents, Google will discipline employees who “troll” (deliberately provoke) or “dox” (leak online private information such as home addresses) their co-workers.

With more explicit rules governing harassment and how Google employees can interact with one another in internal online discussion forums, Google says it’s trying to preserve open debate inside the company while creating a safer work environment for its 80,000-plus staffers.

Those forums have increasingly become hotbeds for harassment, according to employees, who volunteer as diversity advocates. In January, they told USA TODAY they had been targeted by their co-workers, who leaked personal information and comments from internal company forums to far-right websites, leading to violent threats and slurs.

The situation had grown so tense in recent months that Google sought a protective order against Damore, who sued Google in January, to prevent future legal filings that name Google employees who were not party to the lawsuit.

Screenshots of employee discussions that had been included in Damore’s suit led to doxing, Google alleges. Damore slapped Google with the lawsuit after the company fired him last year for an internal memo arguing gender differences could explain the shortage of women in technical and leadership roles in the technology industry.

Nearly a year after Damore’s dismissal, the new rules Google introduced last week are “leaps and bounds better than anything Google had published prior,” said software engineer and diversity advocate Tariq Yusuf, one of a small group of Google employees who spent months lobbying Google management to shield employees from harassment.

Much of the reaction to the new rules inside the company has been positive, but Yusuf and a handful of other Google employees say the rules may not go far enough to shut down the toxic waves of harassment he and others have experienced.

“I personally feel a little safer, but I doubt that most people who’ve been targeted will be able to relax until (Google) builds up a clear track record of handling difficult cases well,” Google software engineer Irene Knapp told USA TODAY. “There’s a lot of history to overcome.”

Google CEO Sundar Pichai announced the new workplace rules last week in an email to all employees. A small group of employees shared them with USA TODAY.

Lack of civility in internal debates on both sides of the diversity debate prompted Google to update its policies, the company said. In a FAQ, Google advised employees: “The important aspect to consider is how you’re communicating your views — you should be debating the issue, not attacking the person.”

The Damore memo and his subsequent firing exposed deep rifts inside Google.

Facing pressure to diversify its workforce — which is nearly 70 percent male and 89 percent white or Asian — Google began publicly sharing data on the racial and gender make-up of its employees in 2014. The Silicon Valley company’s attempts to re-engineer its mostly white-and-Asian male demographics to include more women and people of color have put Google in the cross hairs of the nation’s culture wars.

Employees who spoke with USA TODAY say Google’s much vaunted workplace culture, where staffers are encouraged to freely exchange viewpoints on internal message boards, became as polarized as the national political debate unfurling outside the company even before Damore was fired.

After the firing, some employees accused the company of unfairly firing an employee merely for expressing his personal beliefs. Others argued Google had done too little to advance women and other underrepresented groups or to regulate hate speech and harassment at Google.

A disabled, transgender engineer sued Google, claiming he was let go for defending women, people of color and LGBTQ employees from attacks and for championing transgender and disabled rights on Google’s message boards. A former recruiter alleged the Internet giant fired him for complaining about hiring practices to boost diversity that he says discriminated against white and Asian men.

But it was Damore’s lawsuit against Google that stirred up the most trouble. In the suit, where he claimed the company discriminates against conservatives and white men and that he was harassed for his beliefs, he included names of Google employees.

Google says these individuals were targeted with hateful comments and death threats on their social media accounts and in online forums. “Does anyone realize how easy it is to poison (Google employee’s) food or drinking water?” an anonymous person wrote online.

According to a protective order being sought by Google, some members of online group supporting Damore have advocated gun violence, not just against “liberal” or “anti-conservative” Google employees mentioned in the complaint, but against all Google employees. In April, a woman shot three people inside Google-owned YouTube’s Bay Area headquarters before killing herself.

Replying to a post about a Google employee, one person wrote: “2 in the chest, one in the head.” “Want to know who works at Google? . . . . Easy. . . . Set Up and Watch Their Office Building and Server Plants . . . Then follow them home and Google their Home Address,” wrote another.

Google has asked the court to bar Damore from including the names or identifying information of Google employees in future filings. A hearing is scheduled for July 13.

That Google has new rules regulating how employees treat one another is largely the result of an unprecedented campaign by a small group of Google employees.

They rallied co-workers, with a petition they circulated collecting signatures from 2,600 employees. They met with management for months to push for the creation of new community moderation standards, to put a stop to the leaking of employee information, to get clarity on how complaints of malicious behavior are handled and to improve the way that human resources handles those complaints.

In March, in a meeting with several executives, including Ruth Porat, chief financial officer of Google parent company Alphabet, and Google’s diversity chief Danielle Brown, the employees say they conveyed their alarm at threats leveled against Google employees who had had their lives threatened, emails phished and home addresses disclosed and were targeted for violence in YouTube videos. The same employees also publicly aired their concerns at parent company Alphabet’s shareholder meeting this month.

One of them, Liz Fong-Jones, a Google site reliability engineer, says Google is making progress in addressing her concerns, but she’s worried the company did not adequately address the systematic targeting of protected groups. And Google did not respond to employees’ request for a company wide discussion on how to make Google more inclusive.

That was to be the subject of a Google town hall the same week Damore was fired. The town hall was abruptly canceled 30 minutes before it was scheduled to begin after employees’ questions were leaked to the public and those employees began receiving online threats.

Google Wants Its Driverless Cars to Be Wireless Too