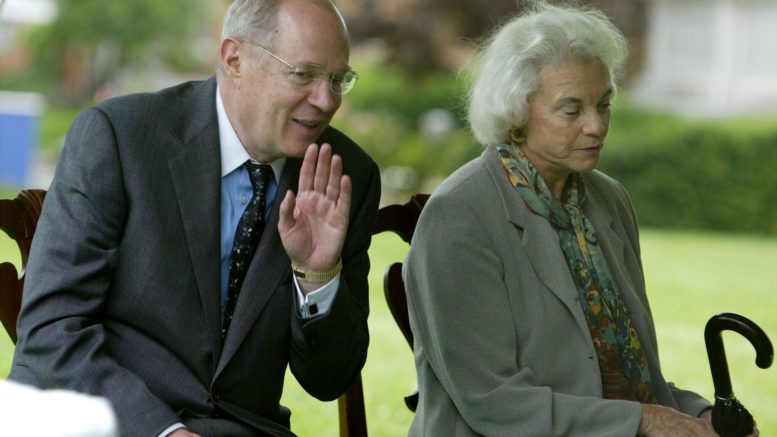 Supreme Court Associate Justice Anthony Kennedy, the ideological fulcrum of the high court whose support for gay rights culminated in his 2015 decision striking down state bans against same-sex marriage, is retiring at the pinnacle of his career.

Kennedy’s retirement will leave a hole for President Trump to fill smack in the middle of the deeply divided court, where all nine justices tend to vote the way the presidents who nominated them expected. Kennedy, a 1988 appointee of President Ronald Reagan, is the most unpredictable.

On the past quarter century’s most consequential and controversial issues, from racial preferences to religious freedom to reproductive rights, Kennedy often bridged the gap between the court’s liberals and conservatives. That role became all the more important in the last decade, following the retirement of Sandra Day O’Connor in 2006.

Thus it was that the 81-year-old Californian — until recently the only Westerner on the nine-member court — cast the deciding votes in recent years on gay marriage and gun ownership, prayer and privacy, campaign finance and capital punishment.

“If you have five,” Kennedy was fond of saying, “then you can say what you want.”

Named to the court two years after the far more colorful and quotable Antonin Scalia, Kennedy became the 14th longest-serving justice in history. He now joins retired Justice John Paul Stevens, who served nearly 35 years, as well as Sandra Day O’Connor and David Souter as the only living former justices.

Kennedy, who turns 82 next month, was something of an accidental nominee. He was chosen as a compromise candidate after Reagan’s first two choices to replace Justice Lewis Powell cratered under the weight of partisan opposition and personal foibles.

Like several other Republican presidents’ choices before and since, Kennedy eventually proved to be his own person on the court, veering from the conservative legal orthodoxy that favors a limited role for unelected judges.

“He is still the must-have vote in close cases on the Supreme Court,” Theodore Olson, a former U.S. solicitor general and a conservative who nonetheless sided with Kennedy on gay rights, said recently.

On some issues, to be sure, Kennedy remained reliably conservative. He wrote what is arguably the court’s most controversial decision this century in Citizens United v. FEC, which has enabled corporations and other outside groups to spend unlimited amounts on elections. For Kennedy, it was a matter of free speech.

“The government may regulate corporate political speech through disclaimer and disclosure requirements, but it may not suppress that speech altogether,” he wrote.

Similarly, Kennedy has been a mostly reliable vote against the use of racial preferences at school or on the job, having never voted for an affirmative action program until last year’s decision upholding the University of Texas’s unique admissions system for minority students.

“Preferment by race, when resorted to by the state, can be the most divisive of all policies, containing within it the potential to destroy confidence in the Constitution and in the idea of equality,” Kennedy wrote in dissenting from a 2003 decision upholding the use of racial preferences by the University of Michigan Law School.

Thirteen years later, in upholding the Texas standard, he said: “It remains an enduring challenge to our nation’s education system to reconcile the pursuit of diversity with the constitutional promise of equal treatment and dignity.”

As was the case last year on both affirmative action and abortion, Kennedy is far more famous for the times he switched sides — most notably when the issue was equal protection under the Constitution for gays and lesbians.

Writing for the court in cases from Colorado in 1996, Texas in 2003 and New York in 2013, Kennedy declared as unconstitutional laws that allowed local discriminatory practices, criminalized private sexual behavior, and denied federal benefits to legally married same-sex couples.

“The federal statute is invalid,” he said in United States v. Windsor, which struck down a key section of the federal Defense of Marriage Act, “for no legitimate purpose overcomes the purpose and effect to disparage and to injure those whom the state, by its marriage laws, sought to protect in personhood and dignity.”

By the time the same-sex marriage case Obergefell v. Hodges reached the high court in 2015, Kennedy’s key vote was all but taken for granted.

“In all of these cases, he recognizes that gays and lesbians are entitled to equal protection under the law,” Erwin Chemerinsky, dean of the University of California-Berkeley School of Law, said. “A tradition of discrimination doesn’t in Kennedy’s eyes justify continuing discrimination.”

The court’s senior justice following Scalia’s death in 2016, Kennedy long has been a thorn in conservatives’ side. Yet Trump went out of his way to praise him in April 2017, when Kennedy swore in the president’s nominee and one of his former law clerks, Neil Gorsuch, as Scalia’s successor.

“Justice Kennedy has been a tireless voice for individual rights and the Founders’ enduring vision of limited government,” the White House said Wednesday. “His words have left an indelible mark not only on this generation, but on the fabric of American history.”

Similarly, all eight of his colleagues on the court praised Kennedy in statements, perhaps none more so than Justice Samuel Alito, whose appointment in 2006 moved the court to the right. “He will surely be remembered as one of the most important justices in the history of the court,” Alito said.

Kennedy’s central role on the court is clear from annual statistics. Over three decades, he authored 276 majority opinions, 165 concurring opinions and 100 dissents, according to research by Adam Feldman, creator of the Empirical SCOTUS blog. Ninety-two of his majority opinions came in cases decided 5-4.

Virtually every term in recent years, he was in the majority on closely divided cases more often than any of his colleagues. In the term just completed, he lined up with fellow conservatives in 13 cases decided 5-4.

It wasn’t always that way. Powell, who Kennedy replaced on the court in 1988, was the swing vote for years. Then came O’Connor, who, like Kennedy, was nominated by Reagan.

It wasn’t until O’Connor retired that Kennedy became the go-to justice. Yet his central role on the court has been on display for a quarter century:

• In 1992, he joined with fellow moderates O’Connor and David Souter to write the court’s plurality decision in Planned Parenthood v. Casey, which upheld the right to abortion even while permitting several new restrictions.

• In 2003, he wrote the 6-3 decision striking down sodomy laws in Texas, and by extension 13 other states, as unconstitutional — one of the three cases that served as a precursor to his landmark opinion legalizing gay marriage.

• In 2015, he wrote the 5-4 decision that declared housing discrimination need not be intentional in order to be illegal. Objections to lending, zoning, sales and rental practices can be based on the disparate impact those practices have on blacks or other minorities, he said, rather than intentional discrimination.

“On abortion, race and gays, Kennedy matters,” said Lisa Blatt, who has argued more cases before the high court than any other woman.

That was evident from the start in the case of Abigail Fisher, who contended that racial preferences cost her admission to the University of Texas-Austin, the Lone Star State’s flagship campus.

The first time that case came to the high court, Kennedy’s name was invoked 50 times in the three briefs submitted by lawyers on both sides. And when it came up for oral argument in October 2012, U.S. Solicitor General Donald Verrilli, siding with the university, went out of his way to align the school’s policy with opinions written by Kennedy in two prior affirmative action cases.

A polite, soft-spoken Californian prone to wearing pocket squares, Kennedy remains one of the least-known justices despite his king-making role. Only one in 10 Americans could name him in a recent Findlaw.com survey, fewer than all but three of his colleagues.

In the wake of his same-sex marriage ruling, Kennedy was favored by 29% and opposed by 21% — but his popularity came far more from Democrats than Republicans.

Kennedy is seldom predictable. Before the 2012 decision upholding President Barack Obama’s health care law, nearly all the experts and prognosticators cast him as the swing vote. That role turned out to be played by Chief Justice John Roberts, whose support salvaged the statute. Kennedy co-authored a blistering dissent arguing that it should have been declared unconstitutional.

The following year, his votes on affirmative action and voting rights cases were the subject of similar guessing games. After oral arguments on the challenge to Section 5 of the Voting Rights Act, which required mostly Southern states to get federal permission for voting procedure changes, Laughlin McDonald of the American Civil Liberties Union sounded a familiar refrain.

“I thought that there were four strong votes in support of the constitutionality of Section 5 and four expressing serious reservations about it,” Laughlin said, “with Kennedy being somewhere in the middle.”

It has been Kennedy’s unpredictability that leaves the outcome of many cases heard by the court up for grabs. Frequently, the liberal and conservative justices line up on opposite sides of an issue. Kennedy sees both sides.

That’s been true on one of the most important issues of the 2017 term, testing whether the drawing of election districts for partisan advantage can be unconstitutional. Kennedy has been the man in the middle in the past, siding with those who cannot identify a standard for striking down such districts, yet calling them “incompatible with democratic principles.” In two cases this term, he kept largely silent, and court punted them on procedural grounds.

In another major case pending before the court that was to decide whether opponents of same-sex marriage, such as bakers and florists, can refuse their services on religious grounds, Kennedy straddled the fence. In his landmark opinion striking down state same-sex marriage bans, he left the door open to such challenges.

“It must be emphasized that religions, and those who adhere to religious doctrines, may continue to advocate with utmost, sincere conviction that, by divine precepts, same-sex marriage should not be condoned,” he wrote.

When the case was argued in December, Kennedy addressed both sides. He said a baker’s refusal to design a gay couple’s wedding cake could be seen as “an affront to the gay community.” But he also said Colorado’s brushing aside of the baker’s religious beliefs “has been neither tolerant nor respectful.” In the end, he got seven votes to send the case back to Colorado for additional work.

On the death penalty, Kennedy generally sides with conservatives, but he has joined liberals in banning capital punishment for juveniles and those with intellectual disabilities. And he has been the most outspoken member of the court against the effects of solitary confinement on death row, which he said “literally drives men mad.”