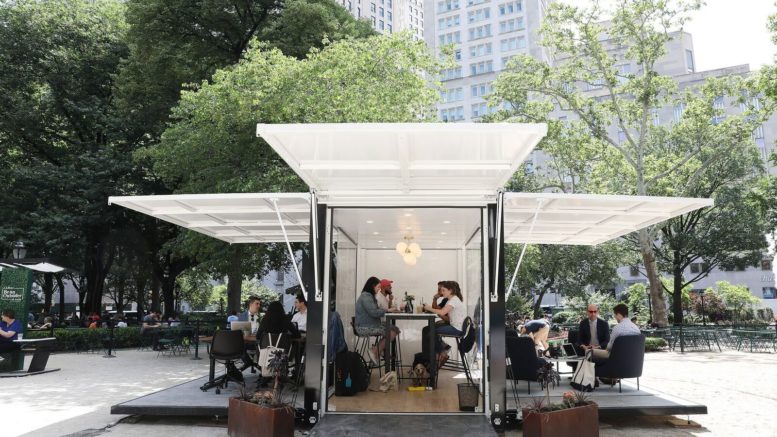 Trees all around you. Freshly cut grass. A breath of fresh air.

No, this is not your backyard. It’s an office space in the heart of a city.

In a six-acre park in New York this month, outdoor retailer L.L. Bean set up a temporary office to demonstrate what cubicle dwellers can experience when they can venture outside to smell the roses as they tap their keyboards. 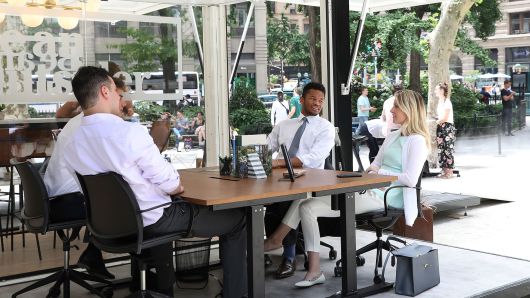 A team takes their meeting outdoors to enjoy the benefits of working outside – increased productivity, creativity and happiness – at the debut of the first-ever outdoor coworking space by L.L.Bean and Industrious in New York.

Partnering with work space provider Industrious, the set-up included all the elements of an office conference room – swiveling chairs, a desk and most importantly, Wi-Fi. But the difference was it resembled a series of sturdy canopies, with a roof and some open sides that had access to fresh air and outdoor sounds. Next month, the project heads to Boston; Philadelphia; and Madison, Wisconsin.

L.L. Bean joins several of the nation’s best-known technology companies to encourage work spaces with a biophilic design – which tries to bring the outside indoors and the inside outdoors. These “green” spaces aren’t just for sustainability; they actually leave humans feeling less stressed and more focused, experts say.

Though bringing the outdoors in has been a trend for decades – water fountains in corporate headquarters and trees in shopping malls – pushing indoor elements outside is newer.

Kirt Martin, vice president of design and marketing at Landscape Forms, an outdoor furniture company in Kalamazoo, Michigan, has seen a “big uptick” in outdoor work spaces because large companies, like Apple and Facebook, are trying them.

“It takes social influencers to get people to change their perspective, and we’re seeing that happening,” Martin said.

And with the advent of mobile technology and laptops, employees can work on the go, not just on passenger trains, planes or cars, but from open-air structures like the New York City park set-up. Combining nature with work is part of a broader trend, and it returns humans to their outdoor roots, said Leigh Stringer, a workplace strategy expert who helped advise L.L. Bean for the campaign.

For most of our evolution “humans have been working outdoors; it’s in our nature,” Stringer said. “It’s only been in the last 300 years or so that we’ve been working indoors.”

That realization is catching on. At the start of this year, Amazon opened “Spheres” for its employees in Seattle. Constructed as glass domes and located on the headquarters campus, these three intersecting Spheres are filled with roughly 40,000 plants and serve as spaces for employees to work and lounge.

“Downtown Seattle … lacks greenery and plant diversity,” John Sa, an Amazon spokesman, said. “By bringing the outdoor work environment indoors, we create an environment where employees can collaborate and innovate together in a peaceful setting that is more like a tropical rainforest than a city.”

In 2015, Facebook created a nine-acre rooftop garden at its headquarters in Menlo Park, California. Apple’s “spaceship” headquarters in Cupertino, California, surrounds a massive park, orchard and pond. And last October, Microsoft built outdoor technologically-enabled tree houses for employees in Redmond, Washington. Even municipalities, such as Silver Spring, Maryland, have worked to provide outdoor working spaces for residents of the area.

Many employees want to have outdoor elements in a working environment, according to L.L. Bean’s 2018 Work and the Outdoors Survey. In this survey, 86 percent of indoor workers said they would like to spend more time outside during the workday, but 65 percent said work serves as the largest obstacle to doing so.

Several theories hypothesize why humans like the outdoors. One of the most popular of these is called the biophilia hypothesis, which argues that humans have an innate desire to seek connections with nature.

Humans are more generous, cooperative, and forward-thinking when surrounded by nature, said Tim Beatley, an architecture professor at the University of Virginia and executive director of the Biophilic Cities Project, a group that works with city collaborators to implement biophilic design across the world.

Biophilic design “speaks to the deeper need for us to connect with the natural world,” Beatley said. “Nature’s not something optional; it’s absolutely essential for leading a happy and healthy and meaningful life.”

Another popular hypothesis that explains humans’ fondness of nature is the attention restoration theory. Marc Berman, a psychology professor at the University of Chicago whose research has contributed to this theory, said that nature could help people better concentrate.

Despite these tangible benefits, one of the largest obstacles preventing biophilic design in the workspace is the perception – or misperception – that working in nature is unproductive. Only half of the respondents in L.L. Bean’s survey said their colleagues and boss would be supportive of working outside.

However, biophilic design is increasingly gaining popularity, according to Justin Stewart, president and co-founder of Industrious.

“This is not just a thing that’s a fad,” he said, “but this is the way that people are going to be continually working for generations to come.”