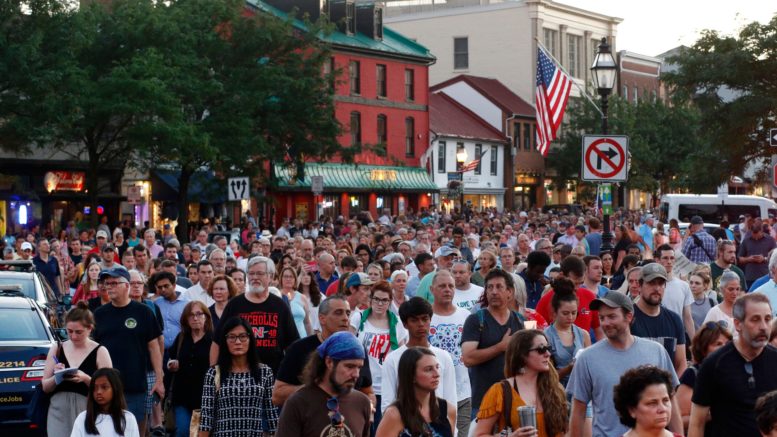 The Capital Gazette detailed how the gunman entered the newspaper’s office, shattering the glass door with the first blasts from his shotgun.

A memorial service Monday in Annapolis will celebrate the life of a sharp, witty, long-time journalist – and shorts will be fine, because friends say “Big Rob” Hiaasen wouldn’t want anybody to be uncomfortable in Maryland’s summer heat.

Hiaasen, 59, and four colleagues were killed Thursday when a gunman rampaged through the newsroom of the Capital Gazette, a small daily that is as much a city institution as the sailboats that fill the harbor and the charming shops and restaurants that line the city’s quaint streets.

The small cadre of Gazette journalists who survived the rampage are mourning their colleagues and doing their jobs, continuing to write stories from the offices of their sister newspaper, The Baltimore Sun.

The Gazette published a print edition the next day, and the staff continued to report and write over the weekend. Among the headlines on the Gazette website Sunday: How the Capital Gazette attack happened. The article cites police – and the staffers who lived through the horror.

Jarrod Ramos, 38, who had sworn a “legal oath” in court documents to kill a Gazette writer, was being held without bond on murder charges. Police say he targeted the paper because of its coverage of his 2011 conviction for harassing a former classmate. Ramos had sued the paper, but a judge threw out his lawsuit.

The Gazette story details how the gunman entered the newspaper office’s main entrance at around 2:30 p.m., shattering the glass door with the first blasts from his shotgun. He had already barricaded the room’s only other exit. 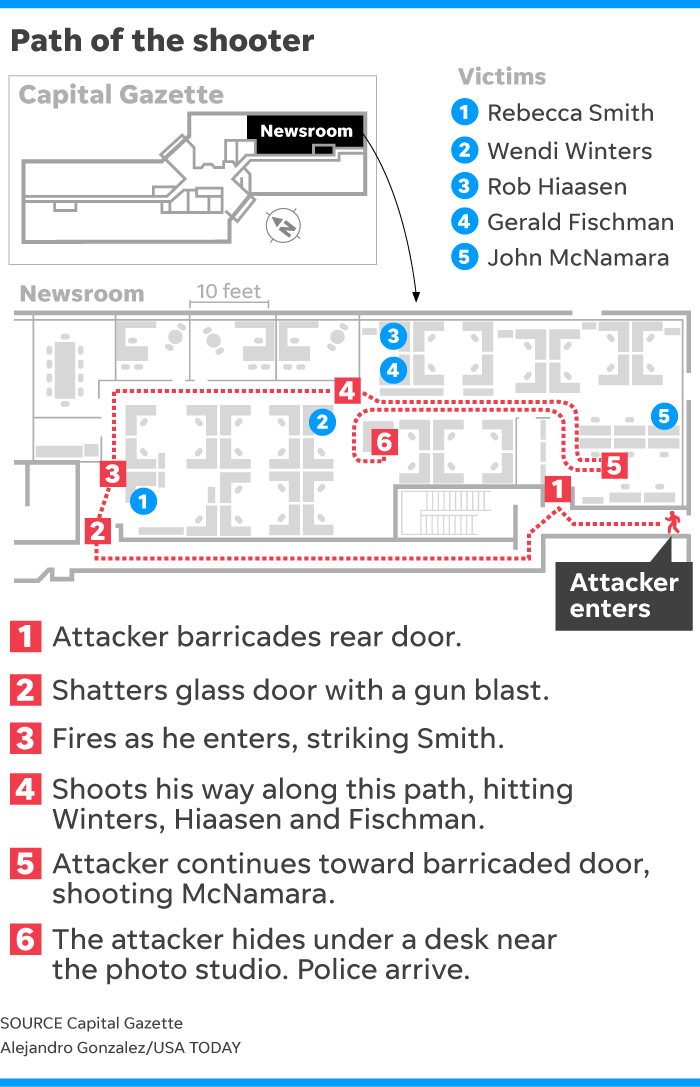 The attacker fired twice at he entered, striking Smith, then picked his way through the room, shooting Winters, Fischman and Hiaasen. McNamara was last, then the shooter apparently ducked under a desk.

Surviving staffers trembled under their desks. The room smelled of gunpowder as police fearlessly swept in, less than two minutes after the first 911 calls. Some tended to victims, others began the search for the gunman.

The suspect was found within minutes and surrendered without further violence. The survivors were ushered out by officers who counseled not to look at the surrounding carnage.

An outpouring of support for the paper and its staff soon followed. A vigil Friday drew thousands to the City Dock. President Donald Trump, who has repeatedly blasted the “fake news” media, called the attack a “horrible, horrible event” and said no one, including journalists, should fear a violent attack for doing their job.

“To the families of the victims, there are no words to express our sorrow for your loss,” he said.

New England Patriots football coach Bill Belichick, who was raised in Annapolis, issued a statement calling the Gazette his “hometown newspaper” for his entire life.

“My family and I have enjoyed special relationships with many great people who have worked for the newspaper,” Belichick said. “My heart goes out to the victims, their families and the entire Annapolis community for this terrible and senseless tragedy.”

In an editorial Sunday, the Gazette said it would never forget the avalanche of love. But the response was not all warm and fuzzy, the editorial noted:

“Here’s what else we won’t forget: Death threats and emails from people we don’t know celebrating our loss, or the people who called for one of our reporters to get fired because she got angry and cursed on national television after witnessing her friends getting shot.”

The lineup of memorial services begins with Hiaasen. Winters will be celebrated July 7. Dates for the others will be revealed soon.

Homage for Hiaasen and the other victims was everywhere.

“This is so sad. Rob taught for the first time this spring,” tweeted Rafael Lorente, associate dean at the University of Maryland’s Philip Merrill College of Journalism. “Feedback: He was a natural. Students loved him. Patient. Caring. And damn good.”

Newsrooms across the country upping security after shooting at Capital Gazette