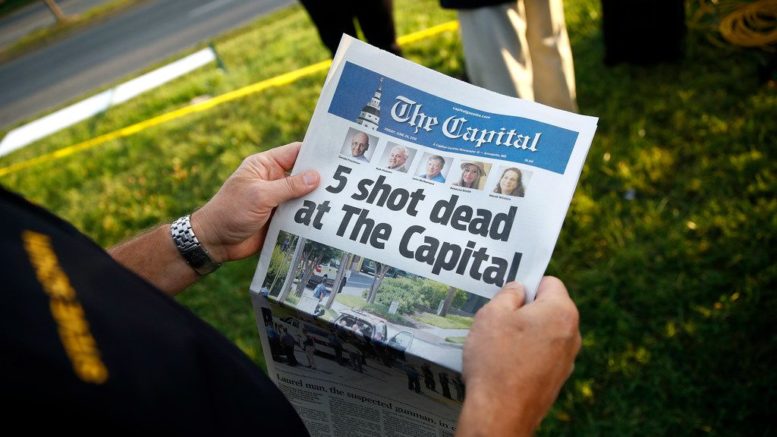 The police knew about his threats. The newspaper he assailed considered him a danger. And in tweets available for anyone to see, the man suspected of killing five at a Maryland newspaper this week broadcast his hate with a stream of invective.

The failure to stop Jarrod Ramos, charged with five counts of first-degree murder for Thursday’s deadly rampage at the Capital Gazette newspaper in Annapolis, shows the blind spots that foil law enforcement and Internet companies — even as the social media gusher puts the warning signs in plain sight. 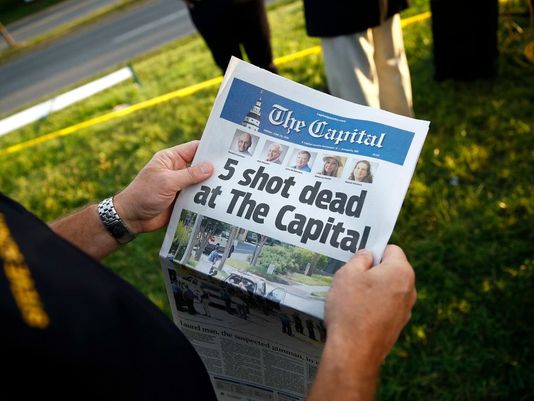 “The terror and violence that we saw at Capital Gazette is another horrible example why our laws need to be updated to reflect modern-day crime,” said Rep. Katherine Clark, D-Mass., who has been pushing for years to bolster federal online harassment laws and increase cyber-training for police departments around the country.

Ramos, 38, posted harassing social media messages that alarmed editors at the paper and led police to investigate, but fell short of leading authorities to pursue charges or Twitter to ban him. Twitter suspended Ramos’ account Friday. It declined to comment on it.

Ramos’ grudge with the Capital Gazette dated back to a July 2011 article in which the paper chronicled his guilty plea for harassing a former high school classmate by email, phone and on Facebook.

A year later Ramos filed a defamation lawsuit against the paper in a Maryland state court and later added a charge of invasion of privacy over the newspaper’s coverage of his conviction.

The lawsuit was eventually dismissed, but that did not stop Ramos from launching a Twitter campaign in which he unleashed vitriol against the paper and its staff, including threats against the former staff reporter who wrote about his harassment conviction, Eric Thomas Hartley, and the retired publisher Tom Marquardt.

In one haunting February 2015 tweet, Ramos’ account said, “I’ll enjoy seeing @capgaznews cease publication, but it would be nicer to see Hartley and Marquardt cease breathing.”

Ramos’ Twitter account featured journalist Hartley’s picture as its avatar, and included the tagline “making corpses of corrupt careers.” On Hartley’s forehead was photoshopped a symbol from the Japanese manga and anime series “Berserk,” which recounts the ritual murder of people marked with it. Ramos also photoshopped the symbol on Marquardt’s head.

Since Nov. 20, 2011, Ramos mentioned in tweets @ethartley or his last name 107 times, Marquardt by name or as “Evil Tom” nearly 100 times and @capgaznews more than 50 times, according to a USA TODAY analysis. 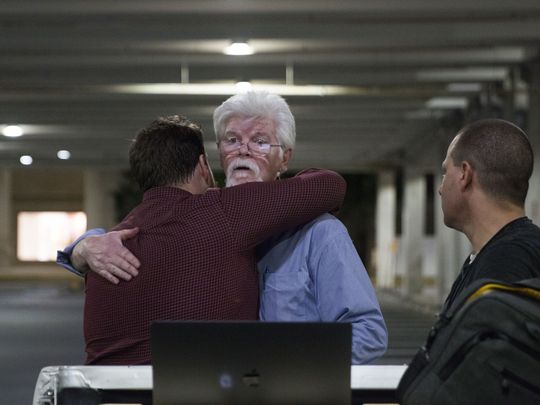 In this June 28 photo, The Capital Gazette reporters Pat Furgurson, center, and Chase Cook hug at a makeshift office in a parking garage of a mall in Annapolis, Md., during coverage of the fatal shootings that happened in their paper’s newsroom earlier in the day. (Photo: Thalia Juarez, AP)

The account regularly attacked the newspaper and its journalists, including a reference to the deadly shooting at the French newspaper Charlie Hebdo in 2015.

It had been dormant since January 2016. Just moments before the shooting on Thursday, it posted a message: “F— you, leave me alone.” That was the same message it posted the day after the state’s second-highest court upheld a ruling in favor of the newspaper.

Marquardt told the Capital Gazette that he called Anne Arundel County Police years ago to express his concerns about Ramos’ attacks on the paper and its journalists on social media.

“I was seriously concerned he would threaten us with physical violence,” Marquardt said. “I even told my wife, ‘We have to be concerned. This guy could really hurt us.'”

Anne Arundel County Police Chief Timothy Altomare said a detective was assigned to investigate the matter in May 2013, but that the paper ultimately declined to pursue criminal charges in the case.

“There was a fear that doing so would exacerbate an already flammable situation,” Altomare said.

Some law enforcement experts questioned whether Ramos’ online posts crossed a legal threshold that would have allowed police to file charges.

“His statements may be defamatory, they may be libelous, they may be obnoxious…But the question is: Are his statements credible threats? In retrospect, it’s easy to say yes. But we have a lot of crazy people in this world saying things,” said Peter Scharf, co-founder of the Gulf Coast Computer Forensics Laboratory and a criminologist at Louisiana State University.

“You now have people saying, ‘Police should be patrolling the internet,’” Scharf added. “But really what’s here that would trigger a rational law enforcement intervention?”

Online harassment has become an epic problem. Four in ten Americans have personally experienced online harassment, and eighteen percent of Americans said they have been subjected to particularly severe forms of harassment online, such as physical threats, harassment over a sustained period, sexual harassment or stalking, a 2017 Pew Research Center survey shows.

For years Twitter was reluctant to limit freedom of expression on the service.

People don’t have to use their real names on Twitter. And with that anonymity has come racist, sexist and anti-Semitic taunts and attacks, as well as full-fledged campaigns from trolls, individuals or groups whose primary intent is to sow discord on social media platforms. Ineffective efforts to police that behavior have driven some users, including prominent ones, from the platform. 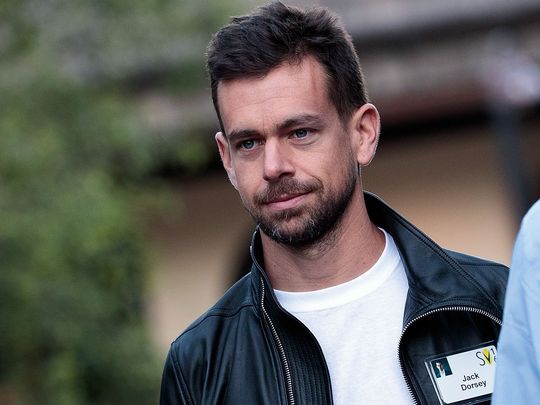 Twitter now concedes it did not move quickly enough to curb abuse and harassment. Twitter CEO Jack Dorsey has pledged Twitter would work to make sure it becomes a healthier environment for users — at the same time abuse on Twitter intensified during and after the presidential election.

The company has taken more forceful steps to curbing harassment, such as by reducing the visibility of accounts that are disruptive or abusive, giving users new tools to block content they don’t want to see and beefing up training of employees who review complaints of harassment from Twitter users.

It’s unclear if the tweets on the Ramos account violated Twitter’s rules.

According to its terms of service, Twitter bans “abusive behavior and hateful conduct” and it bans specific threats of violence of physical harm, death or disease. The threats have to be “explicit statements of one’s intent to kill or inflict serious physical harm against another person.”

New tools to identify harmful behavior would not not have alerted Twitter to Ramos, whose account had been dormant for more than two years until Thursday, when he made a final menacing tweet. Before Twitter began using the new tools, an individual user would have had to flag Ramos’ tweets as a problem. Even when users flag such abuse, Twitter has had a patchy track record of acting on the complaint.

Facebook and Twitter are still not dedicating enough resources to content moderation and are not imposing stiff enough penalties on those who break the rules, fueling the behavior of online trolls, said Jennifer Grygiel, a Syracuse University communications professor who studies social media.

“What we are seeing, too, is that online trolls know exactly the limits in content moderation, how far they can push things before content gets flagged,” she said. “Often aggressive comments fall short of content moderation language.” 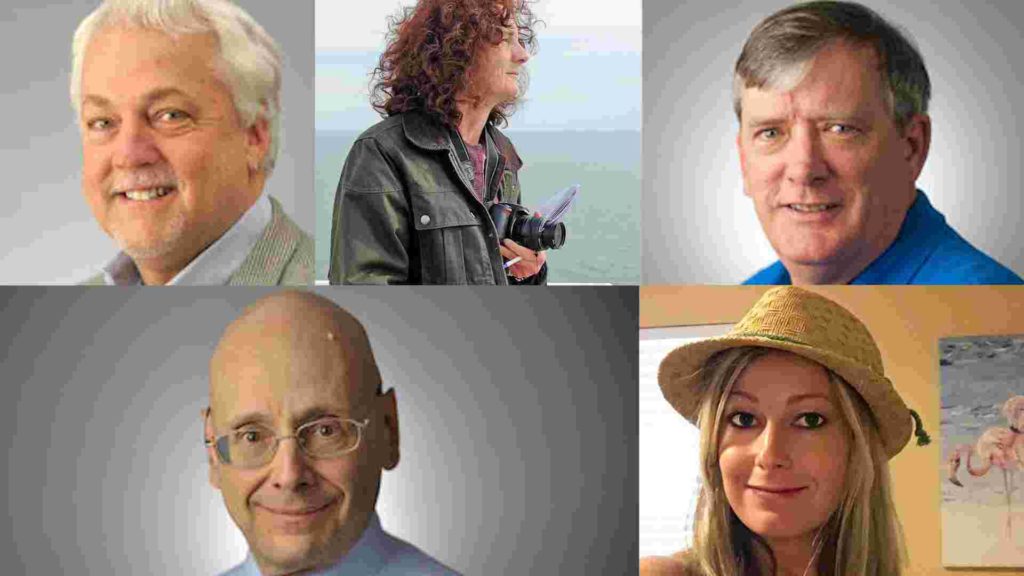 Rob Hiaasen, deputy editor for the Capital Gazette, was one of the victims of the June 28, 2018, shooting at the newspaper.  Sun Media Group

Clark, the Massachusetts congresswoman, said that the scourge of online harassment is further complicated by the fact that many law enforcement agencies — particularly small and midsized ones — have little capacity to train officers on how to investigate incidents.

On the federal level, prosecution of cybercrimes has been inconsistent, analysts say. Clark said that the issue has simply been a lower priority issue for federal prosecutors.

“With the training of law enforcement, we have seen some progress. Indeed, there are prosecutors who specialize in online abuse,” said Danielle Citron, University of Maryland law professor who advises Twitter on safety issues. “But the gains have been modest and online stalking laws remain seriously under enforced around the country.

Brianna Wu, a computer programmer who faced death and rape threats from supporters of a militant online movement known as Gamergate that targeted feminist criticism of the gaming scene, said that the Capital Gazette massacre underscored that all stakeholders — law enforcement, lawmakers, social media platforms and their users — need to act.

The FBI identified four men who sent threats of rape and murder to women, including Wu. The U.S. Attorney for Massachusetts, however, declined to prosecute.

“Everyone has a role to play — myself included,” said Wu, who is now running for Congress in Massachusetts. “We need to stop feeling powerless and we need to start getting it done.”

Newsrooms across the country upping security after shooting at Capital Gazette